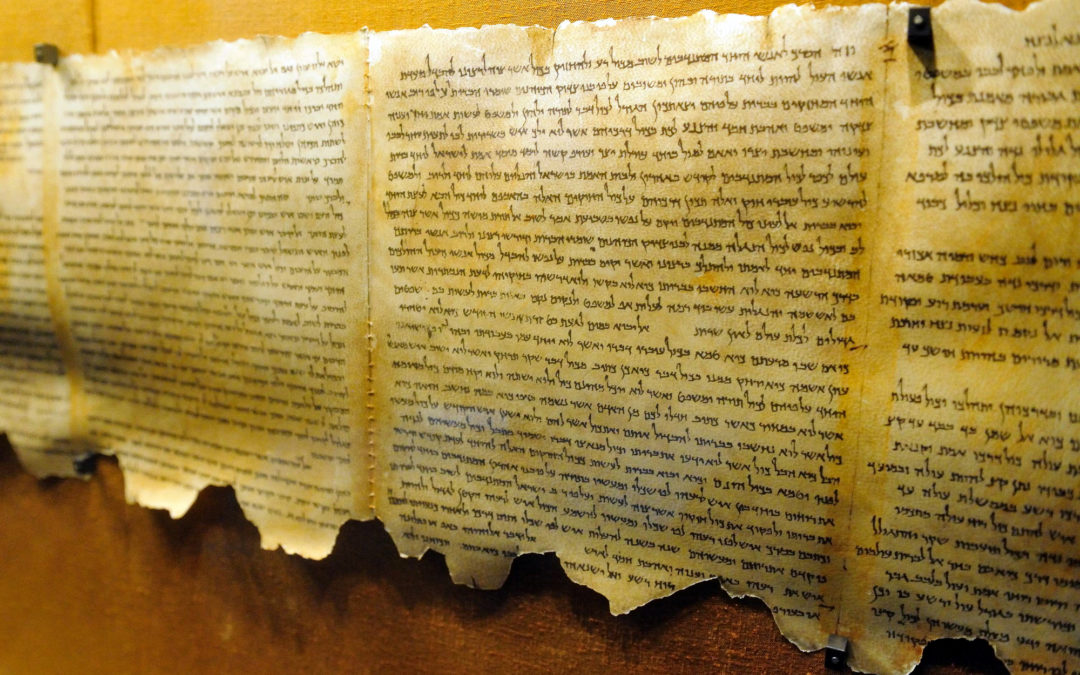 In 1946 or 1947 — no one knows for certain — a Bedouin goatherd nicknamed Muhammad the Wolf led his flock around the cliffs lining the northwest edge of the Dead Sea. As the livestock grazed on sparse vegetation, Muhammad wandered around the boulders. According to one of several variants of the account, he hurled a stone into a cave to startle a stray goat and heard pottery shatter. Too frightened to lower himself into the cave alone, he returned several days later with at least two relatives from his Ta’amireh tribe. Though they fantasized about finding gold and silver, instead they stumbled upon a cache of odd clay vessels with bowl-shaped lids. Inside one jar, they discovered three ancient leather scrolls, intact and wrapped in linen.

The Bedouin carted their scrolls back to their camp. The tribesmen stored the bundle in a goat skin bag and hung it from a tent pole. Unfamiliar with the aged script, they debated whether they should re-purpose the old strips of leather. Fortuitously, Muhammad’s uncle thought to take the scrolls to Bethlehem on market day. Their first foray into the black-market antiquities trade aroused more suspicion than success. One trader sent them on to the next. In the end, they arranged for a Syrian Orthodox merchant, Khalil Eskander Shahin, known as Kando, to sell the scrolls for a commission. Kando owned a general store and cobbler shop near the Church of the Nativity. Archbishop Mar Samuel, head of the Syrian Orthodox Monastery of St. Mark, made the purchase soon after he saw the scrolls in Kando’s possession. As the former librarian at St. Catherine’s Monastery at Mt. Sinai, the Archbishop had experience with ancient scripts. Once Kando took out his commission, the Bedouin returned to the desert the equivalent of $60 richer.

Hoping for an even greater return on his investment, Muhammad the Wolf’s relative returned to the cave and retrieved four additional scrolls. Again, one of them found its way to Kando. The other three scrolls were sold to an antiquities dealer in Bethlehem, Faidi Salahi. Salahi intended to present the scrolls to a Hebrew scholar capable of realizing their full worth.

Exactly 71 years ago, on November 24, 1947, with the British Mandate approaching expiration, the nascent Jewish nation was caught up in a bloody civil war with Palestinian nationalists. Jerusalem was divided by barbed wire, booby traps, and makeshift walls as British troops strained to quell the violence. Professor Eleazar Lipa Sukenik from Hebrew University received a call from an Armenian friend acting as a middle man for Salahi. He promised to reveal an antiquity of interest to Sukenik.

They met at the gateway to Military Zone B, separated by a barbed-wire fence. The Armenian held up a sample fragment of leather. Though Sukenik heard tales of such material floating around the black market, it was only once the Jewish scholar laid eyes on the ancient lettering that he comprehended the importance of the desert find. Even through barbed wire, Sukenik recognized the writing style as similar to first-century ossuaries (bone coffins) in Jerusalem.

Five days later, Sukenik acquired a proper pass and traveled to Salahi’s home in Bethlehem, ignoring travel warnings and the wishes of his wife and son. Salahi permitted Sukenik to take the scrolls and study them before negotiating a price. On a bus full of Arabs, the Jewish scholar carried the Hebrew scrolls under his arm, wrapped like an ordinary parcel. Once Sukenik was in the privacy of his home, he unrolled a fragile scroll with trembling fingers. He logged the intensity of emotion in his diary: “I suddenly had the feeling that I was privileged by destiny to gaze upon a Hebrew scroll which had not been read for more than 2,000 years.” As he poured over the text, he heard the radio announce that the United Nations General Assembly had voted in favor of the establishment of a Jewish state. Spontaneous celebrations broke out in the streets.

On behalf of the Hebrew University, Sukenik purchased Salahi’s three manuscripts: the War Scroll, the Thanksgiving Psalms, and a second copy of the Isaiah Scroll.

The Dead Sea Scrolls made for a symbolic birthday gift to the state still struggling to survive at birth. For the last 71 years, the texts have been celebrated icons of the heritage of a people long recognized for the literary gifts they bequeathed to the world. The Egyptians have their pyramids, the Chinese have their wall, the Greeks have their marble temple, and the Incas had their mountain ridge citadel. The Jews have their scrolls, monuments built from words rather than mortar.

Shelley Neese is the author of the newly released book The Copper Scroll Project and Vice President of the Jerusalem Connection.