What Do the New Dead Sea Scroll Fragments Tell Us? 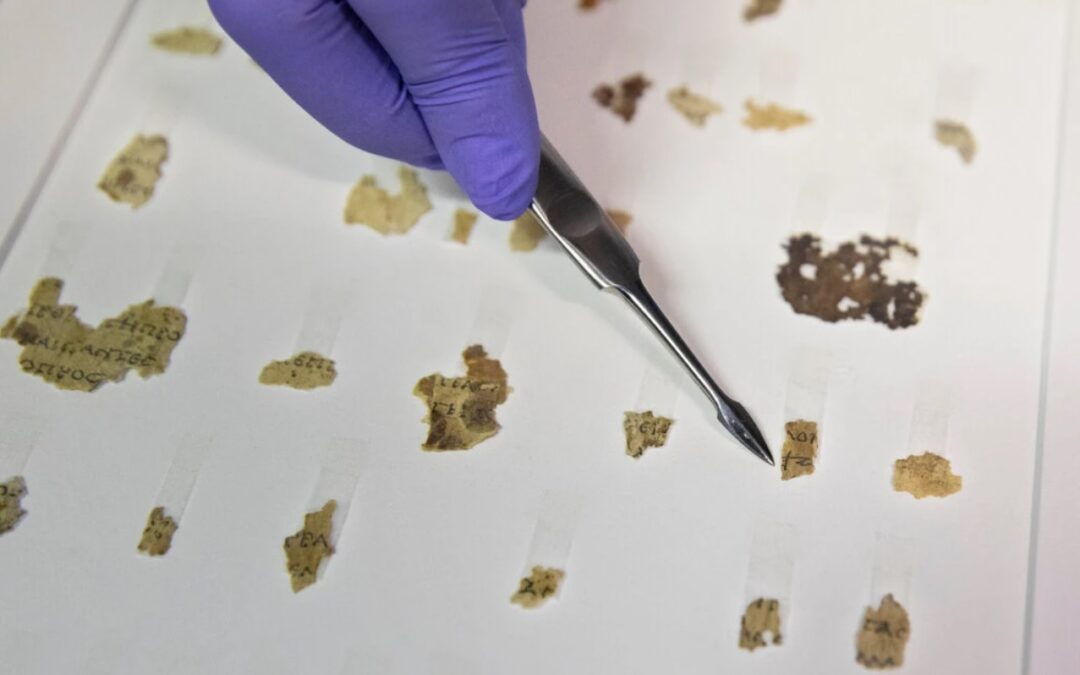 By now you have probably heard that March 17th the Israel Antiquities Authority made a stunning announcement that they had discovered dozens of small Dead Sea Scroll fragments. These small pieces of parchment are the first inked scrolls to be found in sixty years. Two scribes are responsible for the scrolls, written in Greek except for the name of Yahweh which is written in Paleo-Hebrew.

The Dead Sea Scroll Unit responsible for reconstructing the fragments reported that the fragments are from a larger scroll found in the same cave in the 1950s. The reconstructed verses are from Zechariah 8:16 –17 and Nahum 1:5–6.

For the last five years, the Israel Antiquities Authority under the leadership of their director Israel Hasson, has been quietly conducting a rescue effort called Operation Scroll. Their goal has been to systematically excavate every cave in the Judean desert. Since the first Dead Sea Scrolls were found in 1947, archaeologists have been in a race with Bedouin looters to unearth additional caches of Dead Sea Scrolls before they get lost to the black market. Bedouin have had the upper hand for the last six decades.

In 2017, Operation Scroll located a new Dead Sea Scroll cave, not one of the previous caves that was already known by archaeologists. Disappointingly, no new scrolls were found, but they unearthed a piece of blank parchment, scroll jar fragments and scroll covers. They knew they were on the right track.

The cave where these new scroll fragments were found is called the Cave of Horrors. It has been a dangerous recovery effort as the cave can only be reached by rappelling down a cliff face. During the excavation process, the team endured suffocating dust.

The Cave of Horrors had been used by Jewish rebels hiding during the Bar-Kokhba revolt almost two thousand years ago. They left behind coins minted during the revolt, arrowheads, combs, and sandals. Apparently, though, the cave played a role in other parts of human history as well. The IAA reportedly found a 6,000-year-old child’s skeleton and a large basket said to be over 10,000 years old which would be the oldest basket ever found in the world and it was in remarkably good condition.

When I saw this announcement, I could not help but immediately wonder if the timing of these scroll fragments had something particular to reveal to the believing world at this moment in our history. I will let all of you be the judge of how these prophetic utterances may be exactly what God wanted to bring to the world’s attention at this time.

Zechariah 8:16-17 says,  “These are the things you are to do: Speak the truth to each other and render true and sound judgment in your courts; do not plot evil against each other, and do not love to swear falsely. I hate all this, declares the Lord.” For now, I am writing this verse on the chalkboard in our kitchen as an alert to myself and my family.

Nahum 1:5-6 says, “The mountains quake before him and the hills melt away. The earth trembles at his presence, the world and all who live in it. Who can withstand his indignation? Who can endure his fierce anger? His wrath is poured out like fire; the rocks are shattered before him.”

For historical context, Nahum was a prophet whose personal biography we know almost nothing about. He introduced himself in the first chapter and first verse as being from the town of Elkosh, an unidentified town lost to history. Nahum’s name means comforter and his poetry is designed to show the hand of God in the fall of Assyria and how that same hand will go on to comfort Israel, one of Assyria’s many victims in its brutal expansion. Nahum spends every chapter of his short book listing out the evil practices of the Assyrians famous for their cruelty in battle and oppressive policies as administrators. Only a hundred years before, God had sent Jonah to the capital of Assyria, Nineveh, to call for their repentance from their evil ways. Repentance did not last long apparently. Nahum was correct in predicting the downfall of the vile empire. In 612 BCE, an alliance of Medes, Persians, and Babylonians attacked Nineveh and brought down the Assyrian army for good. Perhaps the finding of these Dead Sea Scroll fragments from Nahum will comfort modern Israel from her current distress.

Nahum’s first chapter includes this promise from Yahweh to his covenanted people: “Look, there on the mountains, the feet of one who brings good news, who proclaims peace. Celebrate your festivals, Judah, and fulfill your vows. No more will the wicked invade you; they will be completely destroyed.”

Nahum and Zechariah are referred to as minor prophets but the message that they brought to the Israelites of their day still has potent power to all of us listening for the voice of God today.