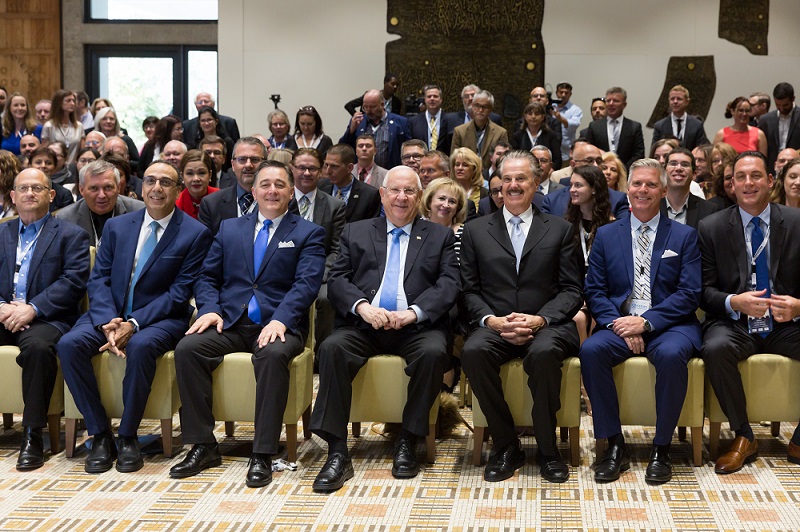 Two weeks ago, I had the opportunity to attend the second annual Christian Media Summit in Jerusalem. Hosted by the Government Press Office, the four-day event brought together 130 pro-Israel Christian media figures from 30 countries. The goal of the summit was to strengthen cooperation between Israel and Christian communities. In some ways, it was also a victory lap considering all of the amazing things achieved over the last year: moving the American embassy to Jerusalem, pulling out of the Iranian nuclear deal, withdrawing support from UNRWA, and ending our membership in UNESCO.

Prime Minister Benjamin Netanyahu was the keynote speaker for the first evening session. While the Prime Minister is often put into a mode of defense at regular press gatherings, on this occasion he was relaxed and personal. When an Indonesian Christian woman thanked him for granting her a visa, he scribbled a note to himself and put it in his suit pocket. When an American man suggested that Netanyahu appoint a government emissary to the Christian world, he again scribbled a note to himself and put it in his pocket. Again, and again, Netanyahu reminded the audience that Israel has no better friends in the world than Christians. Ambassador David Friedman joined Netanyahu on the stage, thanking the participants for advancing the truth about Israel. Quoting from the gospel of John, Friedman proclaimed “the truth will set you free.”

The following evening, Mayor of Jerusalem Nir Barkat joined the group at a special dinner in his honor. The next afternoon, President Reuven Rivlin hosted the group for a luncheon at his home. While we were all sitting and waiting for the President in the reception hall, we did what Christian groups often do and we sang. At first, we sang Israel’s national anthem and then we tried “Oseh Shalom Bimromav.” We quickly exhausted the group’s Hebrew abilities so the suggestion was made by a Jewish radio host from California that the group have a chance to sing a hymn. Arlene Bridges Samuels, a Christian blogger for Times of Israel but more importantly a singer, led the group in three stanzas of Amazing Grace. Nitzan Chen, the government press officer and lead organizer for the summit, said this had to be the first time that a Christian hymn was sung in the reception hall of the president of Israel.

Considering the theme of repentance, hope and redemption explicit in the Christian anthem, Amazing Grace, I got good ole fashion chill bumps as I prayed silently in my head thanking God for this opportunity and for bringing his children, both Jews and Christians, back together after two millennia of division.

In President Rivlin’s speech, he declared that the “words of Israel’s prophets were coming true before our eyes.” A room of Christians from all over the world gave a collective heartfelt “Amen!”