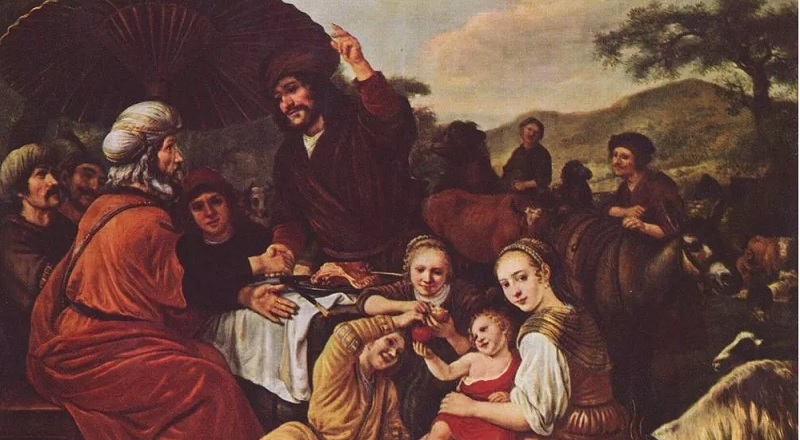 The 54 weekly Torah readings, or Parashat Hashavua, each get their own title. The titles are commonly derived from the first meaningful word or words in the text. Mostly, the titles translate to unrevealing phrases like “And he called,” “Elevate!” or “Send for yourself.” Only five sections are named for biblical characters. In the fifth reading of Exodus, that rare privilege goes to Jethro: a non-Israelite, the father-in-law of Moses, and the priest of Midian.

The Jethro Torah portion (Yitro in Hebrew) covers Exodus 18:1 to 20:23. The section begins where Pharaoh ends. The Israelites are encamped opposite Mount Sinai, gathering their daily portions of manna and quail. As they enter their seventh week of freedom, God is about to call them into covenant as a “kingdom of priests” and a “holy nation.” God’s people—His “treasured possession”—are primed and ready to receive their foundational laws. But before the earth-shaking events of Sinai, Exodus takes a pause to expose a hiccup in Moses’ leadership style and detail the recipe for its correction.

Jethro is the father of Moses’ wife Zipporah. Jethro is first introduced in the Bible when Moses escapes Egypt and flees to Midian—somewhere in northwestern Saudi Arabia. The justice-driven prophet Moses instinctively defends Jethro’s daughters from rowdy shepherds, even though he is on the run from Egyptian law. Grateful, Jethro opens his home to Moses, despite his refugee status, and gives him his daughter Zipporah in marriage. Moses lives in Midian and works as a shepherd for 40 years. When Moses hears from God through the burning bush, he first consults Jethro. Jethro understands and supports Moses’ return to Egypt, despite his leaving behind Zipporah and his children.

When Pharaoh and the mighty Egyptian army are humiliated by a group of monotheistic slaves, news quickly spreads throughout the land of the accompanying plagues and miracles. Jethro hears the rumors and sends word to Moses that he is coming to their wilderness encampment. He brought with him Zipporah and Moses’ two sons.

The Bible says nothing about Moses’ reunion with his wife or sons. However, Moses kneels before his revered father-in-law. He escorts him into his tent and relays all the details of the Israelites’ safe passage out of Egypt. Jethro listens and proclaims, “Now, I know that the Lord is greater than all gods, for he did this to those who had treated Israel arrogantly.” Jethro was so moved that he offered a sacrifice to God. Aaron and the 70 elders of Israel shared a meal with Jethro; the Bible notes that the presence of God was there in the tent.

The next day Jethro observes Moses in his daily role of judge over all the Israelites. Moses hears the disputes between the people from morning to evening. Jethro, a seasoned leader of his own tribe, perceives that Moses is leading without delegating. He is destined to wear himself out. Jethro, acting as an executive consultant, specifies the judicial system necessary for such a large group of people. He advises Moses to appoint a hierarchy of wise elders to hear minor disputes. The major issues are reserved for Moses. Moses chooses capable men from all Israel and makes them officials over thousands, hundreds, fifties and tens.

In the first chapter of Deuteronomy, the Torah repeats the invention of the Israelite judicial system again, with the same organizational details. In Deuteronomy, however, the idea comes directly from God after hearing Moses complain of his workload. No mention is made of Jethro. So why would the Exodus account give credit to Jethro and the Deuteronomy account omit the role of a Midianite?

The author’s omission in Deuteronomy likely has something to do with the fact that the Israelites’ relationship with the Midianites grew complicated. Intermarriage with Midianites brought idolatry into the Israelite camp. In Moses’ last battle, he severely punished the Midianites for their corruptive influence. Hundreds of years later, Gideon and his undersized army put a final end to Midianite attack. Attributing the invention of Israel’s judicial system to the leader of an enemy people was likely an unsettling detail. The fact that Jethro’s contribution is preserved in Exodus gives immense credit to the reliability of that oral tradition.

Today, in Israel, there is a non-Jewish minority group, the Druze, who identify as descendants of Jethro. Jethro is not only regarded as their ancestor but also their chief prophet and spiritual founder. The Druze people number around 120,000; they mostly live in hillside villages in northern Israel. The larger Druze community crosses over the borders into Syria and Lebanon and edges towards one million. Ethnically, they are Arab. Strict monotheists, the Druze religion is secretive and difficult to label, but it blends Greek thought with Islamic ideas, although they do not identify as Muslim. Druze men are easily recognizable by their mustaches, puffy pants and white turbans. Famous for their hospitality, Druze do not proselytize and their texts are secretive, so questions about the religion often go unanswered to outsiders.

The traditional tomb of Jethro, in Tiberias overlooking the Sea of Galilee, is the holiest site for Druze. Every year, on April 25, Druze assemble in the courtyard at the tomb of their chief prophet to arrange their community affairs. The Druze religion opposes pilgrimages, but the April festivities have a certain pilgrimage quality to them. The Druze community officially broke with Arab nationalism when Sunni Muslims tried to seize the venerated tomb. From then on, the majority of Israeli Druze have fiercely attached their future to the democratic Jewish state. Israel, in turn, recognizes the Druze as a protected religious community.

Since 1948, Druze soldiers have fought alongside Jewish Israelis, and died, in every one of Israel’s wars. Druze today have disproportionately high numbers in the most elite combat units. They hold high positions in Israel’s government. They cross party lines in the Knesset. On the Temple Mount in Jerusalem, Druze police are charged with maintaining law and order. Their presence is seen as less provocative than having Jewish police on the sacred site.

Jewish and Druze soldiers say they are bound by a “covenant of blood.” The blood covenant reflects their belief that Jethro is their progenitor. Therefore, they too, in their own reincarnated beliefs, are descendants of Abraham. Midian was one of the five children Abraham had with his second wife, Keturah.

In 2014, rabbis and students stood reciting their morning prayers in a Jerusalem synagogue when Palestinian terrorists wielding knives and axes burst into the room. In their frenzied murdering spree, they killed four rabbis. Bloodied tefillin and prayer books scattered over the floor. The first responder was a Druze traffic officer, Sergeant Zidan Saif. Saif rushed into the synagogue alone and engaged the terrorists in a gun battle. Eyewitnesses said that because of Saif’s bravery, the terrorists were prevented from moving upstairs where there were even more worshippers. Saif later died from his wounds.

Saif’s funeral was held in his Galilee hometown. He left behind a young wife and baby girl. Hundreds of ultra-Orthodox Jews in buses traveled the 95 miles from Jerusalem to attend the funeral of the slain officer who came to their defense. Thousands of Druze were present. The two tight-knit communities from the extreme opposite poles of the religious spectrum reached out of their own comfort zones and grieved as one. A flood of white turbans converged with a wave of black hats: a covenant of blood.

For those who follow the story of modern day Israel, it often feels as if new chapters of the Bible are being written right now. It is not difficult to imagine a scribe, chronicling how the 21st-century descendants of Jethro now fight as protectors of the same justice system that their great ancestor once helped create. Jethro’s legacy lives on.

Shelley Neese is the President of The Jerusalem Connection and author of The Copper Scroll Project.