The Christians of Israel 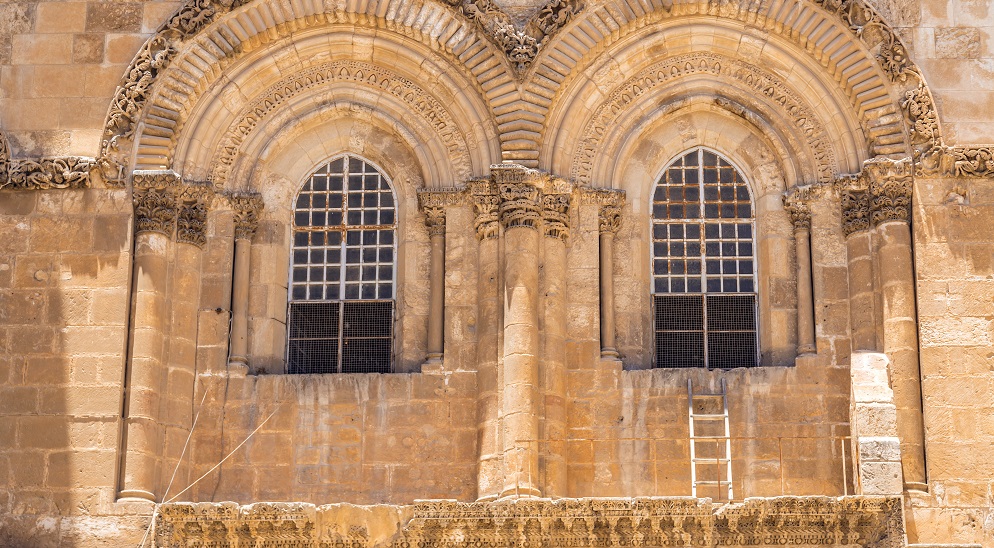 Visit the Church of the Holy Sepulchre in Jerusalem and you are bound to notice a short ladder resting on a second story window ledge. You can also see it in century old photographs and art in the exact same position it is today. On the surface the ladder bears testimony to the disunity of Israel’s Christian community, but scratch the surface and the ladder becomes a symbol of something altogether different—a story of endurance.

There are many legends concerning the origins of this immovable ladder but the general agreement is that the ladder was placed there by the Armenians in the early 19th century. In 1852 the Ottoman Sultan enforced the Status Quo, a rigid division of rights and property between the Church’s six competing denominations. With the Status Quo—which is still enforced today—every stair, icon, and corner and every menial chore has a designated custodian that possessively guards their turf and privileges. Under the Status Quo no part of the designated “common ground” can be changed even slightly without the consent of all the denominations. Windows and ledges fell under “common ground,” leaving the ladder untouched until the religious orders agree—for the sake of the Church façade—on moving the eyesore.

Another example of denominational rivalry at this Holy Shrine is the 12-inch iron key that controls the Church’s single entrance. For the past 816 years the owners of this key have been two neighboring Muslim families. These families meet at an exact time twice a day with the key in hand to lock and unlock the massive wooden doors. The Church can only be locked from the outside. This arrangement was originally assigned by Saladin in 1192. By allowing a neutral party to assume control of the key, the Sultan hoped to bring peace between the jealous factions whose disputes commonly turned violent.

As the Church of the Holy Sepulchre vividly demonstrates, talking about the “Indigenous Christians of Israel” is hardly referring to a monolithic group. They neither speak with one voice nor act as one movement. Israel’s Christians maintain a strong degree of heterogeneity along ethnic, cultural, and denominational lines. The Christians of Israel—consisting of at least 20 ancient churches and 30 Protestant denominational groups—are a microcosm of Christianity at large.

Survey of Christians in Israel

Christians constitute 2.1 percent of Israel’s total population, putting their numbers around 148,000. This statistic does not include Christians under the rule of the Palestinian Authority in Judea and Samaria. The great majority (around 80 percent) of Israel’s Christians are Arabic-speaking and indigenous to the region. They are Christian Arabs who after Israel’s War of Independence in 1948 stayed inside Israel’s new borders and became citizens of the new Jewish state.

Many of these indigenous Christians have lineages that go back to the early periods of Christianity. The Greek Orthodox have historical roots in the region from the days of the Byzantines. The Armenians have had a heavy presence in Jerusalem since the 5th century. The Syrian Orthodox claim an unbroken presence in Jerusalem since the 6th century. The Egyptian Copts built churches near the Holy Places in the ninth century. Roman Catholics came over with the Crusaders in 1099. The Protestant churches did not come to Israel until the 19th century when the Western powers revived their interest in the Holy Land.

Most Christian Arabs in Israel are affiliated with one of the traditional Christian confessions. 42 percent are Greek Catholic; 32 percent are Greek Orthodox; and 16 percent are Roman Catholic. Other confessions in Israel include the Armenian Orthodox, Syrian Orthodox, Ethiopian Orthodox, Armenian Catholic, Syrian Catholic, Maronites, Melkites, and Egyptian Copts. Of Israel’s 7,000 resident Protestants, the largest group by far is the Anglicans (4500). There are a host of other Protestant denominational groups including Lutherans (700), Baptist (900), and Evangelicals (400).

In 1949 there were 34,000 Christian Arabs living inside Israel. Over the last 60 years the population has more than tripled. This stands in stark contrast to the Christian communities in Judea, Samaria, and Gaza where Christians have been emigrating at alarming rates, particularly after the establishment of the Palestinian Authority. There Christians have dropped from 15 percent of the population to just 1.3 percent today. Bethlehem, the place of Christ’s birth, has gone from 80% Christian to 80% Muslim. From 1997 to 2002, the Christian population in the West Bank declined 29 percent and in the Gaza Strip it went down 20 percent. In roughly the same period from 19952003, the Christian Arab population in Israel grew 14.1 percent (CAMERA, Dec. 24, 2004).

Christians in Israel enjoy the inherent advantages of living in a democratic pluralistic society where they are guaranteed many rights and freedoms. The different religious communities are free to observe their own holy days and days of rest. They have freedom of worship and access to the Christian Holy Places.

Christians in Israel vote and are active in the political arena. They receive compulsory education and attend Israel’s public universities. Israel’s Christians are characterized by low levels of unemployment (even lower than the Jewish population) and high levels of education. They are generally middle class and live in urban areas. 70% of Israel’s Christian Arabs are concentrated in the Galilee, chiefly Nazareth where they make up over a quarter of the population.

On statistical analysis, the Christian Arabs of Israel more closely resemble the Jewish population than the Muslim population. This is true economically and educationally and it is also the case in their birth rates and housing patterns. According to Daphne Tsimhoni, an expert on Christians in Israel:

After acknowledging the ways Christians are flourishing in Israel, it would be amiss to overlook their unique dilemmas as well. For the Christian Arabs in Israel, they are a minority within a minority in a majority Jewish state. Many Christians in Israel say their community struggles to maintain their identity. Being Christian, they will always be viewed suspiciously by Muslim Arabs as potential collaborators with Israel. Being Arab, they will never fully integrate into the Jewish state. Being Christian Arab, they often feel rejected by the wider, particularly Western, Christian world.

Christian Arabs generally find common ground with their Muslim counterparts in their support for Palestinian nationalism and resentment of Israel’s identification as a Jewish state. The most critical Christian spokespeople are the Arab church notables, like Rev. Naim Ateek and the Latin Patriarch Michael Sabbah. The public utterances of these church leaders and their persistent condemnations of the “occupation” are intended to embarrass the Israeli government. Israel has on more than one occasion asked the Vatican to restrain Sabbah’s rhetoric but to no avail. The lay Christian Arabs choose to express their discontent through political and legislative channels. From 1950 until the mid 1970s, Christians accounted for about 50 percent of the Arab members of Knesset, far exceeding their proportion in the population (2).

As for Christian Arabs relations with their co-citizens in Israel, tensions between Christians and Muslim have mounted since the 1980s but particularly over the last eight years. The second intifada and its emphasis on violent resistance alienated Christians operationally. Though many Christian Arabs speak critically of Israel they do not engage in political violence. There has never been a Christian suicide bomber in Israel (3) nor are there any Christians in Israeli jails suspected of terrorism (4). With the electoral victory of Hamas and its takeover of Gaza, Christians are also put on the defensive ideologically. The Palestinian national movement has become an Islamic movement where at best Christians are merely tolerated and at worst they suffer the same fate of Rami Khader Ayyad, owner of Gaza’s only Christian bookstore who was murdered in October. The intentions of the Islamic movement are uncomfortably clarified in the common Palestinian grafitti: “First the Saturday people, then the Sunday people.”

In regards to Christian-Jewish relations, despite Christian Arabs’ often pro-Palestinian stance, they tend to have a low level of social conflict with Jews. They coexist well in mixed Jewish-Arab towns like Haifa where Christians often prefer to live because of the stronger Western influence. While there is no formal segregation, there are obvious patterns of self-segregation. Christian Arabs speak Hebrew as a second language and have adapted to Israeli culture.

Most importantly, Christians may sympathize with Palestinians under the Palestinian Authority but they believe their own future is tied to Israel. This was best demonstrated in 2004 when the Sharon government was flirting with the idea of ceding the Galilee Triangle, which is mostly Arab, to the Palestinian Authority; 90% of the Arab residents (Christian and Muslim) said they wanted to stay in Israel.

Christians have been a permanent fixture of the religious landscape in the region for 2,000 years. From the preaching of Peter at Pentecost through the successive foreign occupations to present day in the Jewish state, Christians have shown enormous staying power in the Holy Land. Though the outlook for Christians in the rest of the Middle East seems bleak, Christians in Israel are slowly growing and thriving. Christians in Israel who do not admit as much and publicly criticize the state at least acknowledge that they are only able to do so because they enjoy so many rights. One can only hope that one day Christian Arabs overcome the pressure exerted on them by their Muslim counterparts and come to appreciate their status as the Middle East’s freest Christians.

When tour guides bring Christians to the Church of the Holy Sepulchre in Jerusalem, they inevitably point out the ladder on the second story window and the one-way lock on the Church doors. As they speak of these legends, the Christian groups blush from embarrassment at such petty examples of denominational dissension. But what they often do not appreciate is that the ladder and key have had such permanence because Christians are still there, still fighting, and creating workarounds. When that wooden ladder rots it is actually replaced with a new one. Once a year, the largest denominations at the Church submit an official request to win back the iron key. The ladder and key are actually symbols of stability that characterize the unbroken tradition of Christians living in the Holy Land.

(1) “Israel and the Territories Disappearance Disappearing Christians of the Middle East” by Daphne Tsimhoni. Middle East Quarterly (Winter 2001).
(2) Ibid.
(3) There were three Lebanese Christian Suicide Bombers during Lebanon’s Civil War in the 1980s. George Habash, leader of the Popular Front for the Liberation of Palestine, is often cited as an example of a Christian terrorist but Habash was more Communist than Christian.
(4) Archbishop Hilarion Capucci of the Greek Catholic church is the exception. He was caught smuggling arms for terrorists into Israel from Lebanon in the early 1970s and was imprisoned in Israel for three years.