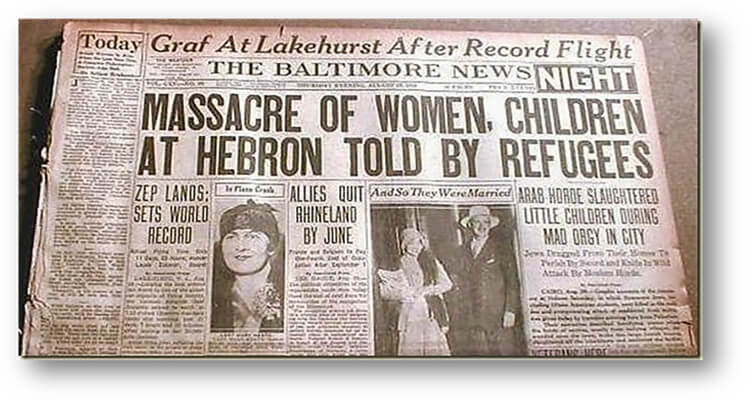 Last Wednesday, Israel held a day-long state ceremony at the Cave of the Patriarchs and Matriarchs in Hebron. They gathered to commemorate the 90th anniversary of the Hebron massacre—an act of terrorism in 1929 that left 67 Jews dead and dozens more seriously wounded. Hebron’s Jewish library, hospital, synagogue, and long-standing yeshiva were all either burned or trampled.

Prior to the attack, Hebron had been a decent example of Muslims and Jews living together peacefully. Certainly, the small Jewish population suffered periodic discrimination by the Muslim majority but for the most part, they lived together as neighbors for centuries. After the Balfour Declaration in 1917, tension between the two communities flared over the rise in Jewish immigration and talk of a Jewish homeland. Still, the British authorities and Jewish residents did not foresee the degree of the coming violence.

The grievance behind the attack was based on rumors that Jews wanted to take over the Temple Mount in Jerusalem. The rumors started after a group of Jews had marched to the Western Wall with protest signs that read The Wall is Ours, but at the time Muslims were not concerned about the Western Wall. The massacres were launched on the false rally call that Jewish groups were trying to take over the Al-Aqsa Mosque and reclaim the entire Temple Mount. That rumor was a fabrication of the Mufti, Hajj Amin al-Husseini, who needed to bait the Muslim community into sustaining the riots—a tactic that has been regularly resurrected at the convenience of every Palestinian leader. Arafat exploited the Temple Mount well and it is now part of President Abbas’s arsenal as well.

The riots first started in Jerusalem with crowds of angry Muslims carrying weapons onto the Temple Mount. The Mufti threatened the local religious leaders in Hebron with fines if they did not also take action. By the next day, Arab rioters took to the streets of Hebron. As Jews rested and worshiped on their Sabbath day, terrorists broke into their homes one by one with axes and knives. According to the testimonies of the survivors, toddlers were mutilated in front of weeping parents and women were raped before they were brutally murdered. A local Jewish baker who had served Muslim and Jewish patrons for many years was killed in his own oven. As one survivor testified, the screams of the victims “pierced the heart of the heavens.” The last living survivor recounted to Jerusalem Post how he and his uncle hid in a chicken coop only to find his grandfather lying in a pool of blood while his grandmother tried to stop the bleeding with coffee grinds. Jews who survived were in some cases rescued by British police or hidden by Arab neighbors. In most instances though, they were families who held their attackers off long enough or found places to hide. The entire rampage lasted three hours.

With the land under the British administration at the time, British authorities expelled Hebron’s 700 Jews in an attempt to quell the spreading riots. It wasn’t until the military victories of 1967 that a Jewish presence could be restored in the holy city.

With this terrible event imprinted on the hearts and minds of Israelis of today, the Hebron ceremony last week was intended to boost and encourage the small Jewish community who has made Hebron their home despite all odds. According to the Jewish community leadership in Hebron, the ceremony was the first time in Israel’s history that the prime minister, president and speaker of the Knesset were in the ancient city on the same day. Netanyahu said, “We have not come here to dispossess anyone, but no one will dispossess us either.” Avoiding any pre-election declarations of Israeli sovereignty over the Muslim-majority city, he did make an assurance: “Hebron will never be cleansed of Jews… We are not strangers in Hebron. We will remain here forever.”

For Bible readers, Hebron’s importance in Jewish history is obvious. This is the once Hittite city where according to Genesis 23 Abraham buried his wife Sara. Abraham was an alien in a foreign land and therefore he had no family cemetery plot and no right to purchase land. The details of the biblical account make it seem like the Hittites are overly accommodating. They at first insist that Abraham have a field with a cave for burial. Abraham was uncomfortable with the idea of “borrowing a piece of property for burial.” He wanted to rightfully own it. Finally, when the Hittites agreed to let him purchase the land, they quoted him a very inflated price. Abraham still made the purchase.

The transactional details in the text come off as intentional. In fact, each time one of the matriarchs or patriarchs dies in subsequent chapters of Genesis and is buried, the author reinforces the fact that the cave that is “in the field of Ephron the Hittite” was purchased by Abraham. The plot eventually held the tombs of Abraham and Sarah, Isaac and Rebekah, and Jacob and Leah.

It is as if the Bible is weighing in on the side of Israel when she is once again fighting for the land promised to her thousands of years later. God provided this historical encounter to show that the promised land is also a legally purchased land.

Though this is a week late, I want to send my regards to the Jewish community leaders of Hebron. I recognize the long journey of tragedy and trial that has led to a still tenuous and difficult existence for you. I pray for your continued safety and protection and admire your fidelity to the land of Abraham. May your community grow and prosper in peace and security. The mothers and fathers of monotheism have paved the way for both your faith and my own. May their memory and example continue to be a blessing and light to the nations.