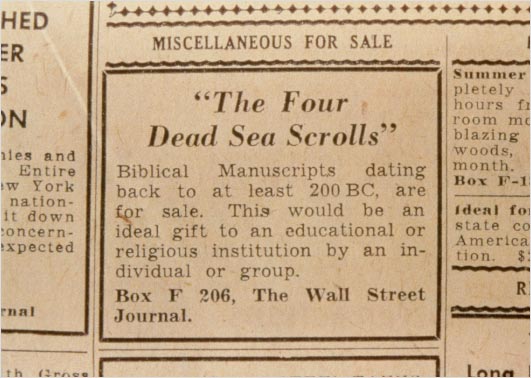 Archbishop Mar Samuel, head of the Syrian Orthodox Monastery of St. Mark in Jerusalem, was one of the first to purchase Dead Sea Scrolls off the black market. Unlike the other scroll dealers, Mar Samuel didn’t like dealing directly with Israelis. To him, all Jews were representatives of the enemy nation.

Mar Samuel brought the scrolls to America to try and secure a western buyer. Despite the intense interest in the ancient Hebrew scrolls, universities and museums were hesitant to make the purchase. Frustrated and out of options, Mar Samuel published an advertisement on page fourteen of the Wall Street Journal: “Biblical manuscripts dating back to at least 200 B.C. are for sale. This would be an ideal gift to an educational or religious institution by an individual or group.” As fate would have it, the Israeli archaeologist and army General Yigal Yadin was in New York giving a lecture the day the ad appeared. Yadin was the son of Professor Eleazar Sukenik, the very scholar who Mar Samuel had refused in negotiations over the manuscripts.

Combining his experience as an intelligence operator and utilizing his connections in the world of academia, Yadin arranged for a Jewish American professor to assume a fake (gentile) identity, meet with Mar Samuel to authenticate the scrolls, and then surreptitiously purchase the scrolls—collectively known as the Dead Sea Scrolls—on behalf of Israel for 250,000 dollars. As an extra precaution, they were flown back to the Jewish nation on three separate airplanes.

And that is how it’s done.