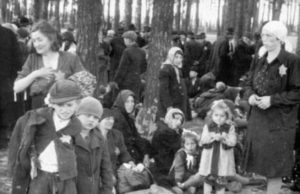 My 13-year-old son came home one day from school and told me that he was working on a research project for his English class. They were studying the Holocaust. The class had read the Diary of Anne Frank in the format of a play with each student taking a reading role. Each student was tasked with researching about a topic connected to the Holocaust. My son wanted to do his project on the faith and heroic efforts of Corrie ten Boom and her family.

Jerusalem Connection has stayed very active in the area of Holocaust education ever since our beloved Pat Mercer Hutchens of blessed memory launched her portrait series: Auschwitz Album Revisited.

I reached out to the teacher to let her know that we had a Holocaust survivor living right here in our county and asked if she would like her to come speak to her class. This excellent teacher did not hesitate for a second. She responded that it would be a great honor and then decided to extend it beyond her English class and to over a dozen other classes studying the Holocaust. With the help of a friend at Northern Virginia’s Jewish Community Relations Council, what resulted was an assembly of 400 students meeting together in a High School theater on November 22nd. 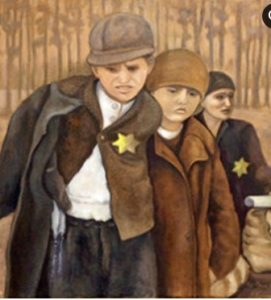 Our special Holocaust survivor was Irene Weiss. I first met Irene at a dinner to honor Holocaust Survivors at George Mason University in 2013. Pat Hutchens had given dozens of prints from her Auschwitz Album Revisited series and they were auctioned off with the proceeds going to Hillel’s Holocaust Education efforts on campuses. What made that night extremely special was that one of the survivors speaking at the dinner was Irene Weiss. Pat had painted the 13-year-old Irene’s family from a photo in the Auschwitz Album. She gave her presentation on stage with the painting right next to her. It was an amazing tribute.

Thankfully at 88 years old, Irene is still healthy and willing to share her story. She talked for over an hour with the 400 students, showing them pictures and answering their questions. Irene was 13 years old when she and her whole family were deported to Auschwitz on a train. Upon arrival, she was quickly separated from her mother, younger sister, and two brothers. Unbeknownst to her, they were killed in the crematorium within the hour. Irene should have gone to the “not-fit-for-work” line with her mother and brothers but because she had on a head scarf that made her appear older, she was considered “fit-to-work,” as was her sister Serena. They were stripped and deloused and stationed in the storage houses. For eight months, they sorted through the thousands of coats, shoes, eyeglasses and millions of other personal items that piled up each day. When Irene asked the other prisoners about the possible whereabouts of her family, they pointed to the smoke coming from the chimney.

The Auschwitz Album is the only surviving photographic evidence of the selection process at concentration camps. The Nazi official who took the pictures seemed to be doing routine documentation. Twenty-five years after the war ended, the album became public when it was donated to Yad Vashem. It was the first time that Irene saw pictures of her family from the day of their seperation. 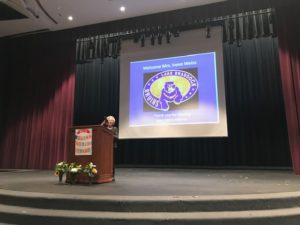 In the album, Irene found a picture of her mother in a grove with her sons, waiting to go to what they thought was the shower. Irene knew her experiences in the concentration camp were real but seeing the album was a confirmation to the haze that had fallen over her memories, and it was another chance to see the faces of her long-lost loved ones.

Learning about the Holocaust from books is one thing. Hearing from a survivor is something that is remembered for a lifetime. I hope and pray that the 400 kids who had the honor and privilege to meet with Irene Weiss will be impacted for life. I hope that they made a commitment in their young hearts and minds last Friday, “Never Again!”

Please click here if you would like to donate 75.00 to our Holocaust Education efforts at The Jerusalem Connection and receive a print of Irene Weiss from the Auschwitz Album Revisited.